Georgia advises a diverse array of clients on a variety of commercial and property matters.

Georgia studied at the Australian National University in Canberra, being awarded a Bachelor of Laws with first-class honours, as well as a Bachelor of Arts with majors in French and International Relations. Georgia subsequently obtained a Graduate Diploma of Legal Practice and in 2015 she was admitted as a solicitor in the ACT Supreme Court. Georgia completed a Master of Laws at the University of Queensland in 2020 and was admitted to the 2020 Dean’s Honour Roll for outstanding academic excellence.

Prior to working at OMB Solicitors, Georgia held a range of government roles in Canberra, including roles in procurement, administrative law, and legislative development and scrutiny. She also held positions at the Australian Parliament House, where she worked for two successive prime ministers.

Now based on the Gold Coast, Georgia works to understand her clients’ objectives and provides advice on discrete transactions as well as longer-term projects.

Georgia advises a diverse array of clients on a variety of commercial and property matters, including: 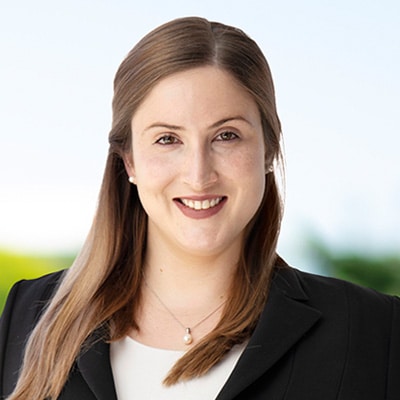 Contact Georgia today to chat about your property and commercial law matters.